We are a family-owned, local outdoor gear shop located in the heart of historic downtown Flagstaff. We have a knowledgeable staff to help get you set for your next adventure, no matter how big or small. 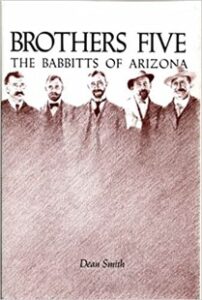 Babbitt’s Backcountry has a long history with the Flagstaff community. In 1886, the Babbitt Brothers arrived from Cincinnati, Ohio and established the C.O. Bar cattle ranch on lands between Flagstaff and the Grand Canyon. The historic C.O. Bar is one of the largest cattle ranches in the southwest and continues in operation to this day.

In 1888, David Babbitt, one of the five brothers decided to turn his lumberyard into a general store and all his brothers eventually joined him in the enterprise. He built a long mercantile along Aspen Ave using red Moenkopi sandstone that was locally quarried, as his main building material. The Babbitts could see the potential of the arrival of the Atlantic and Pacific railroad to bring manufactured goods to the region. The trading post sold items like oil lamps, canned food, hardware, blankets and saddles.

During this time, a system of underground tunnels, rumored to have been built by Chinese immigrants, snaked their way from Northern Arizona University up through downtown Flagstaff. Following a huge fire downtown in the early 1900s, it was rumored that the immigrants used the tunnels to avoid being harassed by locals because many people blamed the immigrants for the fire due to their cooking practices, a few of the downtown businesses like Babbitt’s Backcountry and the Monte Vista Hotel still have access to these basement tunnels today.

The current building on the corner of Aspen Ave and San Francisco Street, is the same structure that was there in 1888, just a bit smaller. Over the years, parts of the building have been used for the Coconino County Courthouse, a department store, apartments and retail business.  Throughout all these transitions, the building has remained within the Babbitt family.  There have been many changes to the structure over the years, but the original brickwork outside and the tin ceiling and sales counter inside are still intact and maintained.  Swing by the shop to check it out and pick up a book to learn more about the area.

Looking for a warm jacket for your furry friend? W…

Did you know we rent out snowshoes? Come rent a pa…

The snow is still falling, but we’re open at 9 and…

We can help you with: